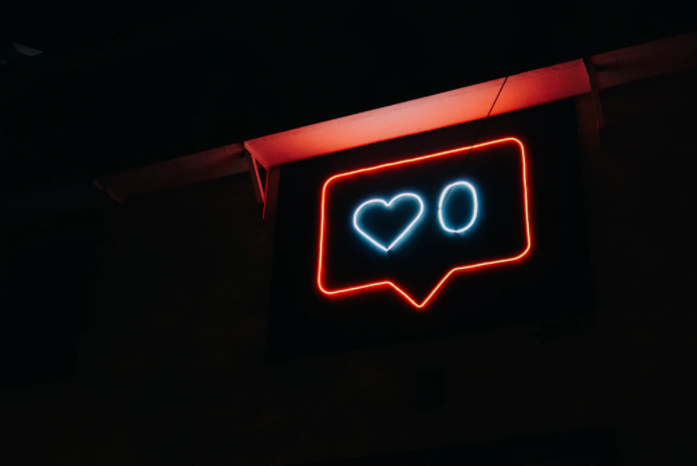 We correlate data on which brands had the most active hashtags, mentions and organic engagements, so our results are always authentic and accurate. As social media advertising spend is on the rise, influencer marketing platforms have transitioned into pretty muddy waters. In 2019, Canada and the US wasted as much as $255 million of the $1.4 billion spent on Instagram influencer marketing on accounts with fake followers.

In the UK alone, ad watchdogs have also cautioned around 300 social media influencers for breaking the rules when it comes to paid advertising for posts on Instagram. This hasn’t slowed down the demand for influencer marketing services, however, in 2021 influencer marketing is set to grow 15%, to a $5.8 billion dollar industry.

Without further ado, here are the top 10 most active brands in influencer marketing for January 2021.

First on our list is Bang Energy. In January we saw a staggering amount of influencer content from the energy drink brand, with a focus on South American influencers. Bang uses influencers to continuously promote its products—rather than using them for a singular campaign—and to urge social media users to “follow the inventor” of Bang Energy, rather than the brand’s main account. In addition, all content created was in video format.

The type of content produced wasn’t primarily focused around the energy drink, but showed an “idealistic” and “aspirational” lifestyle, with lavish houses and expensive cars and the energy drink thrown in there randomly—almost suggesting Bang customers could achieve this life from simply purchasing the drink. All the content was sponsored, rather than gifted and there was almost no discussion of the product, with all posts seemingly to be content for the sake of content. Some influencers used include: @lizalexamtz, @pameladrudi and @henriquelima.

Fashion brand Pretty Little Thing, better known as PLT, is frequently seen using influencers on Instagram to promote itself; and this January is no exception. PLT uses influencer marketing to promote its brand in general, rather than specific campaigns or products. It regularly collaborates with hero influencers for new fashion collections, but also uses micro and macro influencers for continuous Instagram promotion. Frequently recurring hashtags include #PLTbabes and #prettylittlething.

In January, we have not seen any specific hashtags or messaging from the influencers PLT has sponsored, but most do mention winter outfits, or stay-at-home comfies. The content is usually focusing on a piece of an outfit, or the whole look. The majority of influencers used in January have been micro influencers (those with more than 10K followers, but less than 100K) and the posts are mainly sponsored rather than gifted. Influencers included: @melinahalpinx, @aimiegreenx and @cliodhnamclaughlin_.

Boohoo, in general, has a very similar influencer marketing strategy to PLT, and this extends to menswear. Influencers collaborating with BoohooMAN generally use the hashtag #boohooman or #boohoomanofficial and the following sizes of influencers used generally starts around 100K, which is significantly higher than influencer collaborations with PLT or Boohoo women’s. 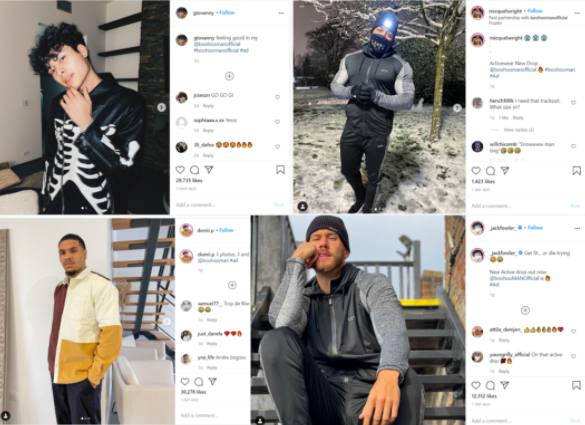 Recent activity in January is promoting the new Active drop on BoohooMAN, although influencer captions do not go into details about the new range nor is there a range-specific hashtag used. For the new Active range, BoohooMAN have utilised male fitness influencers, alongside male fashion influencers. In conjunction with this range, BoohooMAN continued with general influencer activity for its brand and products. Influencers included: @_jackfowler_ (1.2M followers), @miquelwright (127K followers) and @giovanny (557K followers). 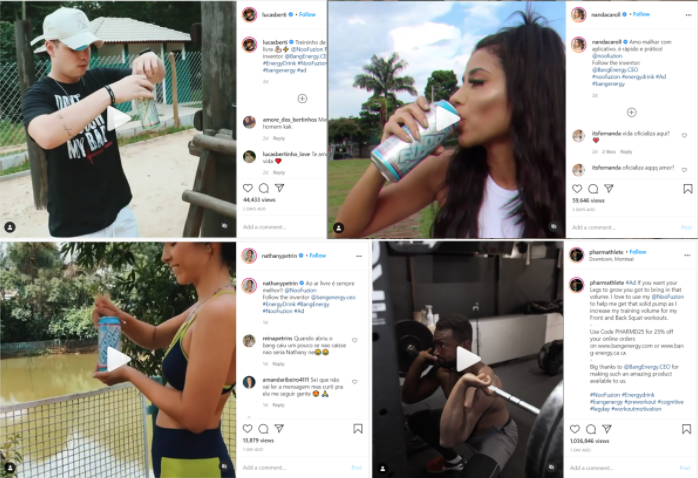 The influencers from South America encourage their followers to workout outdoors with the help of Noo Fusion. In comparison, an influencer from Canada (@pharmathlete, 1.2M followers) encourages his followers to use Noo Fusion before a big weights workout. All influencers used are hero influencers with at least 1 million followers.

Shein’s approach to influencer marketing can be summarised with “the more, the merrier” as it prefers to use a large number of micro influencers, as opposed to a few hero influencers. Influencers for Shein don’t tend to be focused around a specific campaign, but more general promotion. Influencers are generally given a personalised discount code from Shein that is put in their caption, along with the product ID of the item in the post. Having a personalised discount code is a great way to track conversions and see which influencers and types of post work the best. 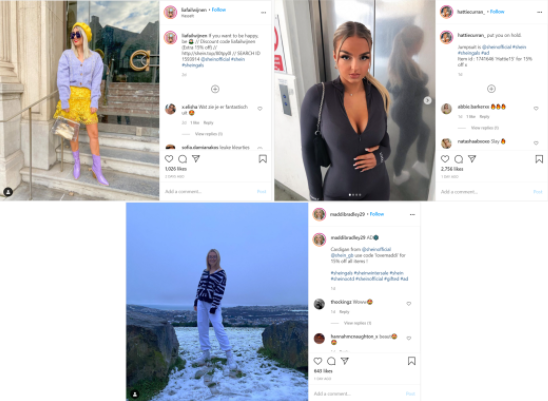 All influencers used are female fashion, beauty or lifestyle micro influencers, with follower counts ranging from 10K – 50K. Influencers were based all over Europe, with some from Belgium, Italy and the UK. These included: @liafailwijnen, @harriecurran_, and @maddibradley29.

Unsurprisingly, the go-to location for influencer favourites, Like To Know It, regularly partners with influencers for sponsored content. The app has recently been pushing influencer marketing in the US more than other locations. Influencers used are typically female, millennial (sometimes Boomer) lifestyle or fashion macro influencers. There has been a recent focus on Valentine’s Day outfit and accessory ideas, alongside every-day loungewear. 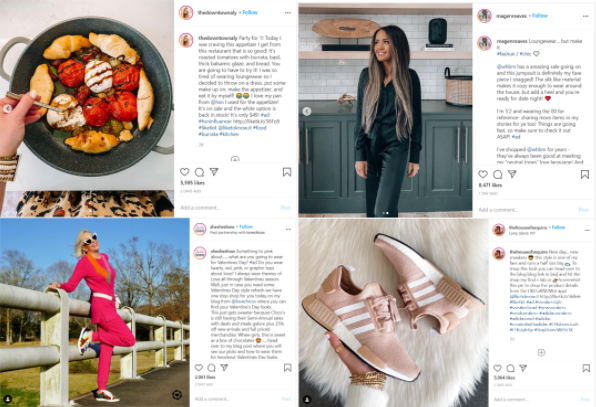 The captions of content created generally has a description of the item available to find on Like To Know It, and then encourages social media users to go to the influencers’ bio to download the app. Although there are no campaign specific hashtags, the majority of content uses #liketkit. Influencers used in January include @thedowntownaly, @magenreaves, and @shesheshow.

Even though Lanistar has been outed as a potentially fraudulent company, it has still managed to partner with various influencers all over the globe in January. The company seemingly has no preference for type of influencer and has even used a Kylie Jenner fan account. The sponsored content all feature the influencer holding a Lanister card, with the caption generally encouraging followers to register an account.

As mentioned, the type of influencer varies greatly (from Kylie fan accounts to book reviewers), but all accounts are macro influencers and have over 100K followers. It is likely Lanistar will continue with its influencer marketing, as it is still yet to officially launch. Influencers used in January include @beatrice.lorenzi, @kylie.sassy and @its_lynxxx.

Online fashion retailer Zalando has been using influencer marketing to push the women’s winter-wear available on its site. The content produced is primarily photoshoots in snowy scenery with influencers in full Zalando outfits. The content is sponsored, rather than gifted and all captions feature the hashtag #zalandostyle. The hashtag is seemingly used across all Zalando sponsored content, but it also encourages customers to share their outfits as user generated content.

Influencers used in January are from across Europe, primarily Germany and Scandinavia. Zalando has focused on micro and macro influencers, seemingly with a focus on engagement rate—@annaerikssons, who has just under 7,000 followers received 1,040 likes and 45 comments, meaning an engagement rate of 16%. No content produced talks about or directly promotes items pictured, acting more as a lookbook or catalogue than a paid promotion.

Maybelline’s January influencer marketing takes us to India. Maybelline has enlisted hero and micro influencers for an influencer activation around its Colossal Mascara. The content urged social media users to #BeColossalEveryday by using the mascara. The captions position the Colossal mascara as an everyday go-to, emphasising the ease at which the mascara gives “bold lashes in just one stroke”. 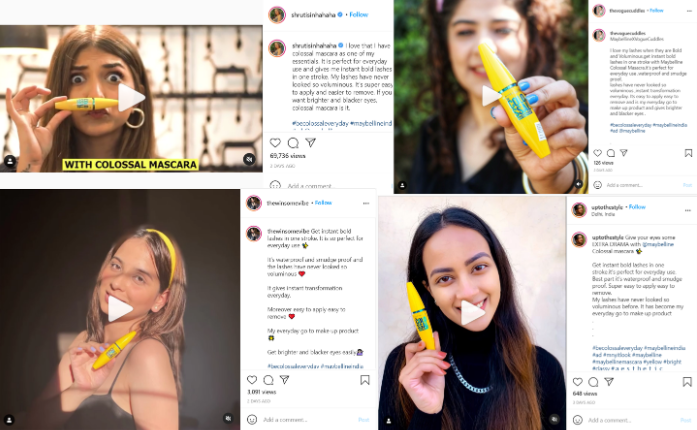 Every caption created sticks to a very similar script, but keeps the tone the influencer would usually use. The content of the micro influencers is all the same, presenting the mascara in a photo-collage video, showing the step-by-step process of putting on the mascara and showing the result after one stroke. @shrutisinhahaha, the hero influencer, showed the mascara in a “get ready with me” way, providing more of a tutorial on how to get bold lashes with the product.

Sabon Japan partnered with Japanese influencers to promote new scents of its body cream and beauty oil. Descriptions of the products were written in a review format, rather than a scripted caption. General messaging for the body cream included intense moisture without a sticky residue. The main focus was on the beauty oil which is a vegan mist that can be used on your body and hair—with six new scents available.

Although there was no specific hashtag for these two products, all captions included #SABON. The beauty brand used a mix of micro and macro Japanese beauty influencers. Some of these include: @chinami.tokunaga, @nonnoroom, and @rrriiroo.